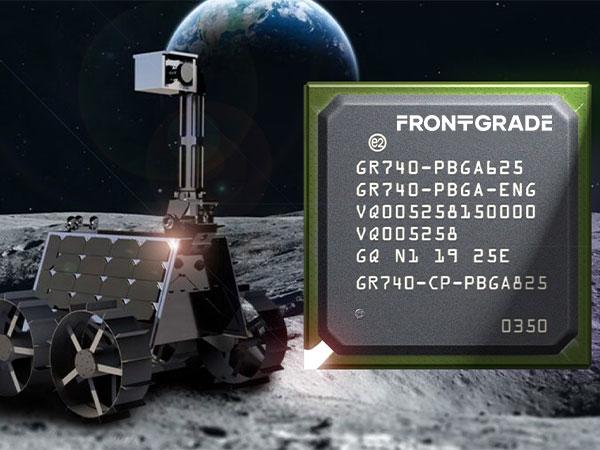 Colorado Springs, CO — Frontgrade, a leader in advanced mission-critical electronics for aerospace and defense, has announced that its GR740 quad-core LEON4FT SPARC V8 Microprocessor has been launched onboard the Rashid Rover on December 11 and is now heading to the moon.

The Rashid Rover was developed by the Mohammed Bin Rashid Space Center and is traveling to the moon onboard the Mission 1 lunar lander as part of the HAKUTO-R lunar exploration program. The mission of the four-wheel rover, weighing only 10 kilograms or 22 pounds, will last one lunar day, or 14 Earth days. Its objective is to study the properties of lunar soil, the petrography and geology of the moon, dust movement, and the lunar surface plasma condition and photoelectron sheath.

The GR740 Microprocessor is embedded in the Camera Interface Board (CIB) that is used to control the four cameras onboard the Rashid Rover through an embedded SpaceWire router switch. The GR740 board has been developed by Frontgrade together with AAC Clyde Space. The CIB is connected to a Sirius TCM board, also developed by AAC Clyde Space, which stores and manages the captured and processed images before downloading them to ground.

“Frontgrade has a solid record of LEON technology being flown to the moon with a legacy of robustness for use in various space applications,” said Mike Elias, Chief Executive Officer, Frontgrade. “We are excited to see our processors being deployed to the moon again.”

A GR740 device in an organic (plastic) package was chosen for this mission for its low cost. This version of the GR740 was developed as a low-cost alternative for large constellations and new space applications that require high reliability, and offers the same functionality, footprint, fault-tolerance and radiation-hardness as the QML-V qualified ceramic version.

“AAC Clyde Space has been developing the processing solution for the mission using the organic version of the fault tolerant GR740 microprocessor. It serves the needs of this versatile moon rover but will also meet the needs of a wide range of other customers,” said Stefan Strålsjö, head of engineering, AAC Clyde Space. “It’s a real advantage to be able to work with the same processor technology for both new space and traditional space missions, saving greatly on the software development work and tooling investments.”

About Frontgrade
Frontgrade is a pioneer of advanced electronics for the most technologically challenging defense and aerospace trusted systems. As the largest provider of mixed-signal and radiation-hardened technology to the United States aerospace and defense industry, Frontgrade delivers high-reliability RF, microwave and millimeter wave, microelectronic and digital solutions that enable our customers to ensure a safer, more secure planet. On land, at sea, in the air, in space and in cyberspace, Frontgrade's extensive electronics and enhanced manufacturing capabilities are at the forefront of mission-critical military and aerospace innovation.